If you look at the world of technologies around us he will soon begin to discover that in the recent years practically all technologies got much smaller, lighter and are way more flexible than ever before. And it is the customers' demand after such suitable products that are easier to store and more effective that is behind that big trend of flexible technologies in the field of production of printed circuit boards. And this is what we were discussing with Mr. Stepan Prichystal from Gatema PCB a.s. company that has build its excellent reputation in the recent years and nowadays exports printed circuit boards to practically every country in Europe.

Why are flexible boards such a trend nowadays?

Our entire business field has all been about miniaturization, especially in the recent years. Every year there has been a pressure to make everything even smaller which in reality means dealing with constantly size reducing circuits and joints, bigger thickness, smaller sizes of via openings and thicker contacts on BGA casing. But even that is not enough. More and more often there are bigger demands laid upon the PCB not only regarding the electrical functionality but also a mechanical one. The board then, apart from the necessary obstacle for the transmission of electric signals, becomes a big helper with the final product that is complicated in terms of shapes and containing moving parts. In the world of printed circuit boards we often talk about flexible circuit boards that we can bend and shape according to the form of the final product. Even though first patents for flexible circuit boards are dated towards the beginning of the 20th century, a massive production is then launched only in the last decades and currently market growth of these PCB is faster than with the classical printed circuit boards.

How to deeply get to know the world of flexible technologies?

Although a list of types and combinations of flexi PCB is practically endless and depends on the customers fantasy and limits of the producers, it can be generally divided into two categories. Fully flexible machines and rigid-flex, somewhat a hybrid version between a fully pliable one and a standard fixed PCB. Purely elastic circuits are characterized by extremely low thickness of about 50µm, low weight, significantly increased flexibility and a high thermal and chemical resistance. They are partly limited by the thickness of motives, surface finishings and a total number of layers when flexibility might decrease with every additional layer. On the other side there are rigid-flex technologies combining advantages of fixed PCB and on which it is possible to etch HDI motives and Connect them with a flexible circuit. This is the way to illuminate the usage of cables with connectors and as a result of this further miniaturization and reliability increase happens. Thanks to such technologies the customer might be able to deal with even more issues such as miniaturization, thermal resistance, reliability or even vibrations softening.

Who are typical customers for flexible boards?

Flexible Technologies penetrate many industries which creates all sorts of customers too. But to be able to answer these can be customers from health, military, automotive and many other industries where the customer needs to get a certain unique solution for his company manufactured. In the future I reckon this technology will most likely expand into textile industry as well as wearable electronics or into more frequent applications with bendable  displays. As the production itself is not cheap at all and the proposal is quite simple, a typical customer in terms of the size is a middle-sized to a large corporation with own developing team for HW.

What were the steps that Gatema PCB had to take in order to start producing flexible boards?

At the very beginning we had to audit our customers' requirements. We were considering what they were making, what materials were most frequently demanded. Afterwards we discussed and debated everything with the suppliers and defined a basic set of materials and types of PCB that we were then going to deal with. We would consult and discuss the production itself quite a bit too, because data sheets from manufacturers are one thing but another thing is real experience from practice because different types of PCB are in a lot of ways quite unique. Here we used our partner companies about which we know that they produce rigid-flex in a great quality. A guideline of reached quality is then for us a standardized norm IPC Class 2. 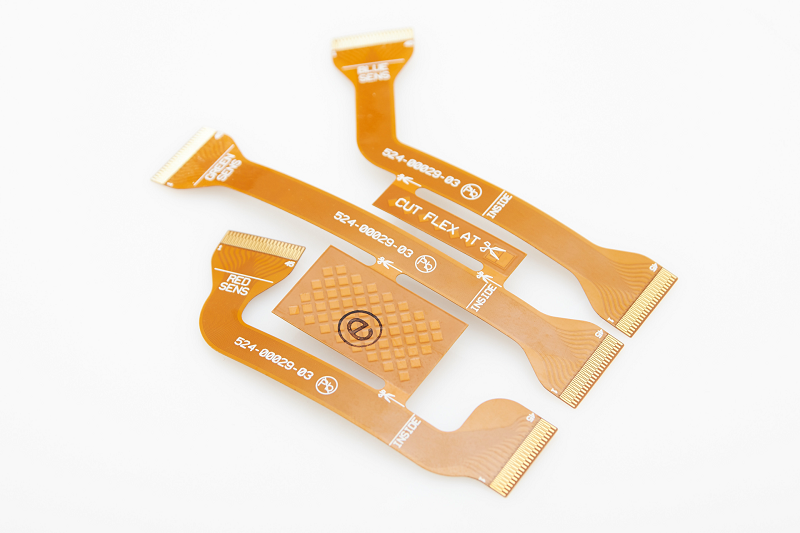 Can you give us a specific example of what you have solved?

We consulted a great deal for example the area of pressing which is a largely critical activity. Pressing or moulding if you like uses large amounts of special pads with which we had not had any previous experience. Process is to a certain extent similar to the production of rigid boards because we are manufacturing on identical lines but there are certain specific differences. Generally it is necessary that the operators treat the flexible boards even more carefully. And that they place even greater emphasis on manipulation because it is a very thin material and has 50 to 100 µm in comparison with a normal board which has 1.5 mm. When the material gets distorted when handled this then makes it much harder to work with in additional processes. So all this is about a lot of preparations and agents for the production lines, about even more careful manipulation during production, about camera guidance at operations and a generally enhanced and increased quality control.

Isn't betting on the flexible boards production denying the entire process of production automation that has been taking place here and at other plants too?

Yes it does, a little bit, but only to a certain extent. But this doesn't have to be necessarily wrong. This could be actually quite a good thing to find out that machines are not quite able to replace human beings completely everywhere. A robot will always have a bit of a hard time working with a thin foil rather than with a solid board which a feeder can grab on one side and hand it over to the production line and take it off the line on the other side. This is more about humanly work - at the proposal itself, thinking and debating with the customers. And more importantly in the production itself where a greater deal of skills is needed. I personally do believe that there is enough space for automation and we should continue with this trend but focus our human skills and forces where robotics still falls short. Quality control and production processes tuning, for instance.

Gatema PCB has been pointing out speed as its main competitive advantage for a long time. Is this going to be the case even with the production of flexible boards?

Yes, I do believe so, but the journey will be an uneasy one. I am very well aware of how much our competitors, that have been producing for years and have vast experience, are ahead of the game. Our goal then is to primarily focus on basic standardized boards without “the specials” which will mean a standard course of operations for our production and hence  minimizing all risks in terms of quality. After all, our daughter company Kubatronik Leiterplatten focuses on “the specials”. Contrary to our competition we should have a large advantage in the fact that we constantly innovate and upgrade our machine fleet. The entire production of flexible PCB is thanks to their dimensional instability a lot about double-checking measuring and about camera guidance of machines so new technologies are an absolute necessity for speedy production. But we do innovate and we have a great team that's why everything fits well together for us here.

Gatema is thriving in Austria and the DACH region. Under the banner of Katema Tec

Boskovice, 4 Februrary 2021 – Gatema PCB, one of the fastest and at the same time dynamically developing European printed circuit board manufacturers, continues to strengthen its position in German-speaking countries. Following last year’s acquisition of the well-known German firm Kubatronik, which specialises in the manufacturing of sophisticated boards for aerospace, military and medical applications, the company is continuing to find success in Austria. There it operates under the banner of the sales offices of Katema Tec, which was established in cooperation with the experienced manager Andreas Kader who is also leading the company.
Read more