The great world of Formula One racing is perhaps too exorbitant for Czechs to break into. It's all about big global brands that are behind their racers and their cars. It's not just about driving skills, but about the ability to win big sponsors, build an elite team, and secure a place among less than thirty chosen drivers. Despite this, a new project is being launched in the Czech Republic that is attracting attention. The project, headed by TU Racing team, which operates at the Brno University of Technology, aims to design the very first electric Formula car in the history of the country. We talked to Dominik Klement, the youngest head of the team in its ten-year history and the first ever team head from the Faculty of Electrical Engineering, about how Czech students are doing compared with global competition and about electronics and printed circuit boards.

How are printed circuit boards used in Formula racing cars?

We use printed circuit boards (PCBs) almost everywhere. And the trend in electrification in the automotive industry has also caught up with the Formula Student competition. It surprises nobody that an electric Formula car is full of electronics and various units, but this trend is increasingly seen in combustion powered cars, too. These are usually units that help the driver concentrate on driving and make it easier for him to drive. For example, there is a clutch control unit, which ensures an optimal start and increased speed in the acceleration discipline. Another novelty is electric steering of the rear axle, which increases manoeuvrability at low speeds and stability at high speeds.

What type of PCBs do you use? What properties must they meet?

At present, we are far from using the latest high-end technologies, only the basic ones such as two-layer and four-layer boards with FR4 dielectric constant. These are mostly low-voltage boards, so we don't need a thick layer of copper. In the future, however, we plan, for example, to develop our own high-voltage converter, which will control the entire power supply for the car, or an inverter that will control the current supplied to the traction motors that drive the formula car. We are glad that Gatema has experience with the manufacture of PCBs for similar applications and that we can rely on their expertise and fast production.

Which member of your team knows most about PCB design?

Our sixty-member team has two sections that deal with electronics. The Electronics section, which is primarily responsible for the design, optimization, and production of the wire harness and for the selection of individual sensors, which are placed all over the car, such as pressure, temperature, flow, or position sensors. The very development of most PCBs is headed by the Electric Powertrain section, which is in charge of the development of most combustion Formula units in addition to the high-voltage traction system. This section is then informally divided into people who work on the development of low-voltage units and into more experienced members who develop high-voltage components. To give you an idea, the traction battery of the current prototype has a nominal voltage of approximately 410 V, while in the future we plan to increase it to the maximum allowed value, which is 600 V. 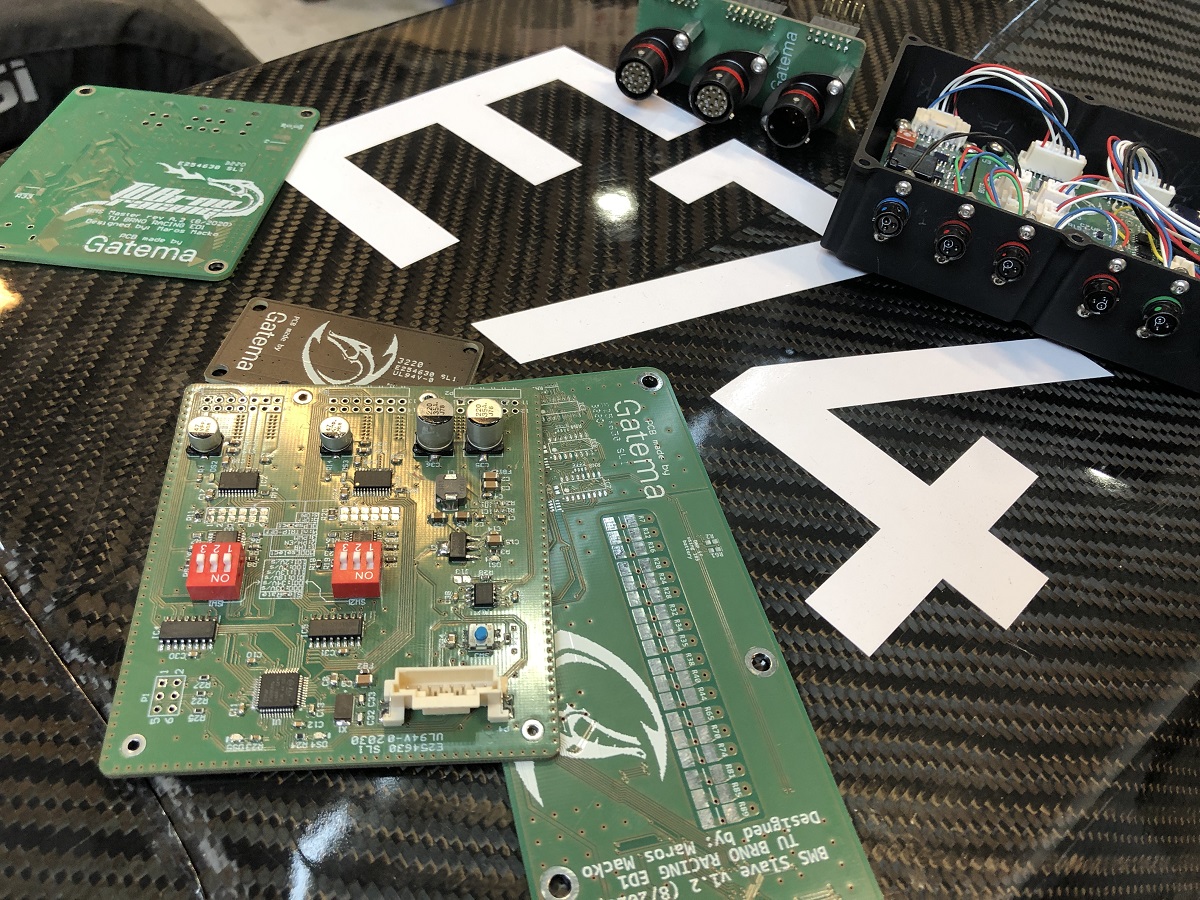 How did the pandemic affect your competitions? And what about the development of the Formula car itself?

Like almost everyone, the pandemic has affected us quite badly. Around mid-March last year, we were denied access to the workshop and the work on the car was suspended in the production phase, where it is crucial to spend time in the workshop. Soon after, competitions were cancelled. Then we set ourselves the goal to finish the cars, test them perfectly, and prepare them for this year's racing season. During the testing of both cars, we have been working on another prototype of electric car, with which we want to reach the podium. We are currently preparing both electric and combustion powered cars for the testing phase, which will begin at the end of winter. The goal is to achieve the desired reliability that has been key to our success in the past. We hold the record in the Formula Student competition for the most completed endurance races in a row, and we would like to improve on that record this year. We plan to take part in summer races on the circuit in Most, Czech Republic, in Hungary, and in the Netherlands on the TT Circuit Assen.

How has your team changed over time?

About a third of the members leave the team every season. Most of them successfully complete their studies and usually find work with one of our partners from the Formula car projects. This means that the team changes dramatically every year. In recent years, due to the development of the new electric drive unit, TU Brno Racing Team welcomed a large number of students from the Faculty of Electrical Engineering and also from the Faculty of Information Technology, and these students make up about a quarter of the team. We were also joined by several students from the Faculty of Business, who are in charge of marketing and presenting the team on social media. This means that the project, which was originally almost exclusively implemented at the Faculty of Mechanical Engineering, has become a university-wide effort connecting students across multiple disciplines studied at the Brno University of Technology.

What do you personally consider the greatest success?

It is difficult to find one thing that I would call the greatest success. The team has undergone drastic changes in the last few seasons. Some were initiated by me, but the result is always the work of the entire team. I am really proud of the way we have tackled the challenge of construction of an electric and a combustion powered car at the same time, and I think I was the very first head of the Electric Powertrain section who put together a team of capable people who are as hungry for success as I am.

You are the youngest head of the team in its history. How did you get there?

It already happened in the first year of my studies. I was most attracted by the complexity of this project and the huge potential of the team. First, I joined the Electronics section where I worked on projects for the combustion powered Formula car. In my first season, I tried to learn as many things as possible from all the other sections and to understand the car as a whole. By the next season, I was given the difficult task of starting the development of the electric Formula car. I started from scratch. I had to put together a team that would have the courage to tackle the challenge and also partners who would believe in and support us. At the end of the second season, I handed over the Electric Powertrain section to my successor and became the youngest head of the entire team in its ten-year history and also the first team head coming from the Faculty of Electrical Engineering. However, the position is largely managerial. And it would not be possible without our sponsors and partners.

How did your collaboration with Gatema start?

Gatema was one of the first who believed in our electric Formula car project and who supported us. Today, we manufacture express boards in Gatema, and we can consult everything with its experts, which suits us. Gatema is now our “golden partner”, which allows the team to function and expand further. This status also brings benefits such as renting a simulator or test driving an actual Formula car at the partner’s event, such as the Employee Appreciation Day. 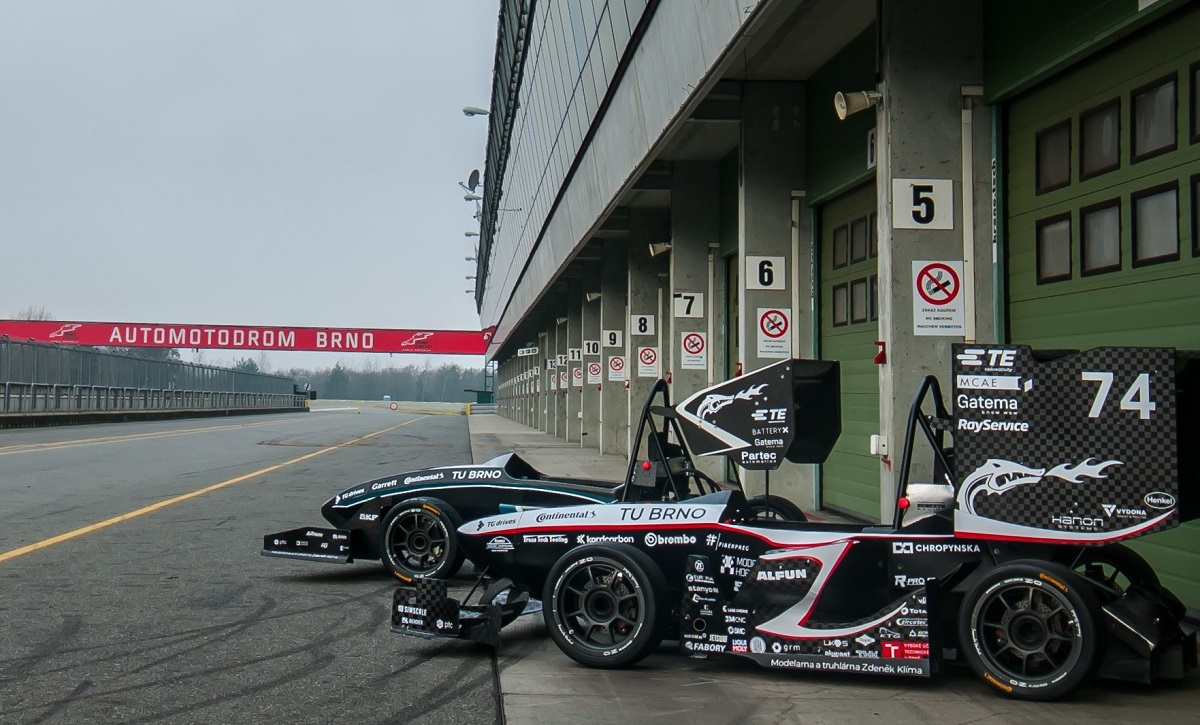